Or something to that effect. Here I am, sitting in our study, with the love of my life, together, at last, not to part, and just how amazing it is, is hard to put into words. The transition was so smooth, it doesn’t cease to amaze me. It is as if I never left here, picking up the cords of my life with my Rissa here, and just going on from there. I just find myself hugging her and us laughing in glee that this journey that took so long, took its toll at times, has now led us together, and just so so much more is yet to come. I can unequivocally state or rather declare how deliriously happy I am, to know that no more partings are in store, that each morning I can wake up with my love, holding her in my arms. This is life. *sigh*.

The flights here were long, and add to that a six hour layover at JFK and the two hours we spent taxiing on the tarmac before we started for home, put the final hour tally to 25 hours since we woke up on the 19th. That is nearly 20 hours spent traveling. The flight to JFK was packed, and I had the misfortune of sitting close to a huge bunch of German tourists who were traveling to the US it seems (rather on a plane) for the first time. Loud, obnoxious and snapping pictures every minute, they made the journey more tiring than it usually is. But well, after the official rigmarole at JFK, I did manage to have some fun, the cheese pizza and the inflated prices of beer and ale at Samuel Adams notwithstanding. But Mom and Rissa were there to fetch me from the airport. It was so delightful to see mom again! Back home, everything was the way I remembered it, such an amazing homecoming. Mom had a gift for me! A box of Ferraro Rochers and a welcome home card. So sweet of her. Rest of the night is a haze as I pretty much passed out due to the jet lag and lack of sleep.

Yesterday was spent putting the study to order, moving boxes to the attic and construction stuff downstairs. My love and I assembled the IKEA tables together and then I started assembling my computer. A few shiver inducing moments as the units failed to start (due to the RAM not being seated properly and a faulty S-ATA II cable, but after a little bit of toil and hard work I was on! OCZ 600W power supply FTW! It is more than adequate for the OC’d CPU and the OC’d GFX card, not to mention the four drives on my sys.

Which brings me to them screen! So dem a come! Gateway FPD2485W, 24 inches of pure bliss. Full HD with an S-PVA panel, bright as the sun, and then some. Rissa and I have been just raving about this screen since we fired off the computer last evening. The viewing angles (170/170), the brightness and contrast, the vibrant colors, responsive screen, just make the deal Rissa found over the Interwebs SO much more sweeter. I have just not stopped raving about this much of screen real estate, and I am sure I am driving my love nuts!

It is fantastic being home. We often dreamed of this day, and now that it is finally here, it is so much better than anything we could’ve imagined.

Stay tuned for pix of the rig and the new life! But a customary screenie follows. 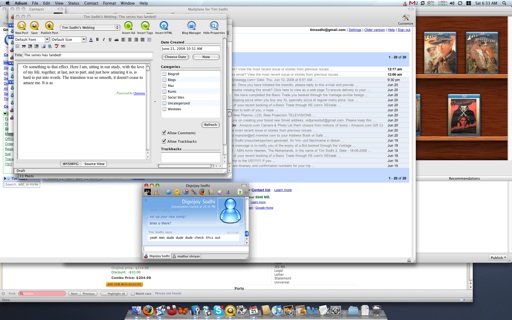 One thought on “The series has landed!”