There has been a lot of debate over the lack of bandwidth monitor apps for OSX. Many will point the clueless reader to iStat Menus, and other such pointless apps, which don’t maintain the amount of data transferred, after a reboot. For Windows there’s the inimitable DuMeter, but nothing did I know came close to its functionality, for OSX. That is, till I discovered – Net Monitor.

Hands down, it is the best Bandwidth Monitor for OSX (Leopard and Snow Leopard). Customizable, and very low in memory imprint, Net Monitor will inspect the traffic out of all your ports. It displays this traffic in a very customizable graph. It not only monitors the amount of data, but also can present customizable reports of the bandwidth usage, broken down by day, or total volume, etc. 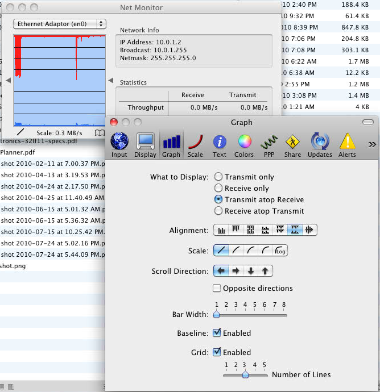 I have been using this app for nearly two years with nary an issue. Those MBs sure stack up fast, and if you are one of the unlucky users whose usage is metered (see Comcast), this app is invaluable for the $10 that it costs. I highly recommend it. Give it a whirl.

One thought on “Best bandwidth monitor for Snow Leopard or Leopard”