Success! After Drew in our office pointed me to a Gizmodo article mentioning how to create a cheap Wireless Device for the XBox 360 using custom firmware, I was all raring to give it a go. As one might know, an XBox Wireless Adapter retails for around a hundred dollars, and even with smart bargain hunting, one is not likely to find it cheaper than around eighty. Not willing to shell out that much for a Wireless adapter (I’d rather spend it on games), I decided to go for a refurb WRT54G2 device I found through a bargain website, on Newegg, for a princely sum of twenty-one dollars. All signs on the DD-WRT website pointed to compatibility with the micro firmware version.
The directions to upgrade the existent firmware on the device were clear. What was lacking in clarity though, was the process to convert it into a wireless bridge. A wireless bridge connects two different LAN segments via a Wireless link – useful to increase the reach of the Wireless Network, amongst other uses. For a fuller description – clicky.
The process can be a little convoluted to say the least. I started by connecting the router to a Windows PC (yuck) via one of the router’s LAN ports. The firmware upgrade process was the same as described on the website. However, directions to set it into the wireless bridge mode were murky – what was missing was that before one starts the configuration, one needs to connect it to the existing Wireless Router. 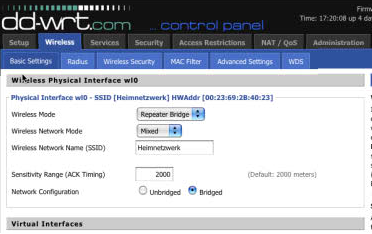 Click the Status Tab -> Wireless -> Site Survey (at the bottom), which will bring up a window with a list of Wireless Routers in the proximity. Choose yours, and click JOIN on the side. This will connect the two Routers, but here’s the tricky part – if you have security on, the directions on the DD-WRT manual don’t specify where one can enter the same.

Enter the Wireless key for the master router in Wireless (Tab) -> Wireless Security, and continue as described on the DD-WRT site. Perfect!
I have it connected to my XBox 360 and indeed, no drops and no connection issues whatsoever. I couldn’t be more happy at having saved some sixty dollars (which I will spend on a new HDD).