The final day, Friday. Having slept early we were still not fully recovered from the long and arduous journey this Summer School has seemed to be. The enthusiasm that fueled our initial days seems to have tempered a wee bit, but was back in force, as this was indeed the last day before we broke up, perhaps never to see each other again (faux schade).

The breakfast of moist, cold croissants just told us how lax these people had become in serving us – the quality of the food having dipped meteorically the past few days. The first session was rather informative, by Dr. Zimmerman, though I wouldn’t have minded terribly had his lecture taken place earlier in the week. This time now, everyone was busy making their presentations for the Cluster Presentation session due to take place next.

It was interesting to see what the groups had worked upon this week and their concept maps. Ivan presented for us, and the presentation went fine, if not too prolonged. And just like that and with the filling of the eval forms, the Summer School 2007 came to an official end. It was really cool getting the certificate, and making plans with Leena, Doreen, Amine Sir and de Jong about going to the beach after lunch.

Lunch, omg, the less said, the better. This is one thing about Provence, none of the sane-minded, non-Frenchies will miss. The parties started for the beach next. Some of the crazier amongst us thought themselves too good for a bus, so took a cab instead. We the sane-minded few, waited for the bus, and laughed our way to Fréjus St. Vincent (?), the heart and center of Fréjus. We decided to go site-seeing first, before heading to the beach. The French speaking amongst us, and Leena took the charge, and we walked to the old Roman Amphitheater. 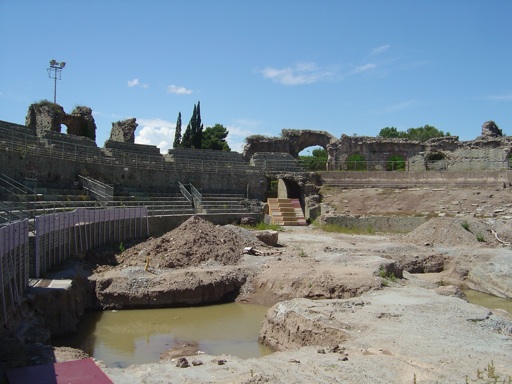 The building was quite much smaller than expected, and I could not well imagine any chariot-races to have been held there, though I could imagine it to have been a venue for great Gladiator matches in ye olden days. We walked back as Doreen taught me some new words in ye Saxony – ‘Mouchebuhbou’ – cuddling and canoodling when the lights go dim, ‘Mouchekippchen’ – ladybug and ‘plautzen’ – banging the door loud.

Walking to the beach in the hot sun turned out to be one of the more difficult endeavors. I trudged along, making the Namesake sick of my “Are we there yet”s. But alas the blue of the sea broke across the horizon, we ran the last few steps into the water. COLD waters! It was just surreal, so much sun and sand and water. It was possibly the 6th or 7th time I had been to the beach. Oh the wonder it is, the amazing time I have there. The others were infected by the enthusiasm too, and there were so many plots afoot to throw me in the water, and at more than one point in time Amine Sir and another guy rushed at me to tumble me in the icy waters.

Kein and Hai were delightful company, and kept taking pictures, most of which can be found with the ‘prolearnsummerschool2007’ tag on Flickr. Kept talking and getting to know Leena and Doreen better. They were just awesome, and it was great to get to know them outside the school. We walked from there in search of Pizza, through them waters. Nothing did I find that would fit our wallets and would be on the harbor. But that didn’t deter us. Hai took us to Casino, a local French supermarket and we bought some tidbits for a beach picnic!

And what a picnic it was. We sat at the beach not knowing what to say and talk about, till the wine and the beers started flowing and then we were on our hands and knees making sand castles and topping them with tomatoes and peanuts. Laughing and having a merry time. 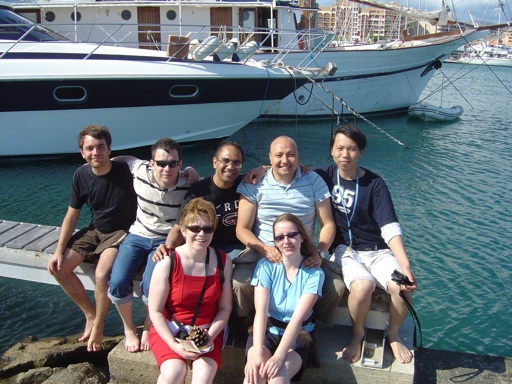 Dinner next after a long walk back, was very good, with more wine and more jokes and slurred conversations. Pizza, finally after such a long time, it was just…. ‘perfection’. We decided against our better judgement to head back to Azurèva to join a farewell party there. What a stupid decision that was. The taxis were plying and could carry only 4 at one time and we were a lot more than that. So 3 trips later, I accompanied the girls back to the cottages, and blah nothing going on. A lot of people in the workshop, a lot of people sitting and chatting, the organizer inside, chatting in their group, a couple of people playing table tennis. What a gyp!

Sat there for a while, quite disappointed, and then decided to play some stellar TT, and played against Ivan, Amine Sir, and de Jong for a while, before deciding to head back, rounding off the trip, with a round of hand-shakes and ‘I’ll never forget you’s.

Goodbye Summer School 2007, it indeed has been quite some journey and a very fruitful time of interacting with peers and discussing and exchanging ideas.