Not a how-to A lot has happened in the OSX86 world. From its humble beginnings back in 2006, when it was the playground of the extremely talented few, and OSX installations were wrought with issues, to the “boom” period when large number of “distros” were the call of the day, and industrious users created their brand of 10.5 flavors for the masses. iPC, iAtkos, iDeneb, and others will be familiar to anyone who has expressed interest in installing OSX on their non-Apple boxes. Where it once was the realm of the adventurous few, it became the turf of every person with the Apple gleam in their eye. And now, when installing retail OSX is the cool thing to do.

No “distros”, no flavors, just plain vanilla OS installed directly from a retail Leopard DVD (10.5.6) bought from the Apple Store. That is the project I decided to undertake this weekend. Laid low by chronic back pain and neck muscle ache, I decided to sit back and take the hours out to install retail OSX on my system that I built back in 2007. A few specs:

Here is a list of things I did need.

The basic challenge is that Leopard won’t boot on a non-Apple machine without some coaxing. Enter the Boot 132 disc. I won’t go into details, but basically you can create a flat DMG with the KEXTs in a folder and the Boot 132 bootloader will load them for you at boot time. KEXTs are kernel Extensions that allow extended functionality to be added to the Kernel without the need to compile all the extensions for devices, etc., directly in the kernel. Boot 132 allows KEXTs for non-Apple hardware to be loaded at boot time and extend the base Apple kernel so that a retail Leopard DVD can be booted. More details here.

Here’s how I went about the installation. I inserted the Boot 132 disc and on being prompted, the retail Leopard DVD. The Installation was straightforward, and understandably the OS installation gave a “Failed” notice at the end. This is because a bootloader hasn’t been installed on the OSX partition.

Next up, I booted from the Boot 132 disc, but chose instead to boot from the newly installed OSX Partition. Leopard welcome and setup screens later, I was in! I didn’t have QE/CI though, as I hadn’t yet edited the com.apple.boot.plist with my EFI string (easily extracted via GFXUtil). I quickly installed Chameleon 2.0 (RC1, as RC2 just doesn’t seem to work for me) and copied a whole list of KEXTs to the /Extra/Extensions folder, and com.apple.boot.plist to /Extra. These are the KEXTs I used.

I deleted the Extensions.mkext in that folder, and corrected the permissions.

Rebooted, and this one’s important – typed in -v -f to force compile the KEXTs at the Chameleon Boot screen, and voila, Bob’s your chum! 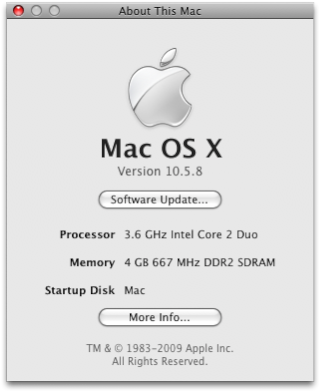 I did however have to install AppleHDA.kext manually, as it can’t be copied to the /Extra/Extensions folder (due to multiple dependencies). I am just so impressed with the performance and stability. Uptime of three days and counting. Again, this is not meant to serve as a how-to, but rather a brief insight into the installation process. . Bring on Snow Leopard! 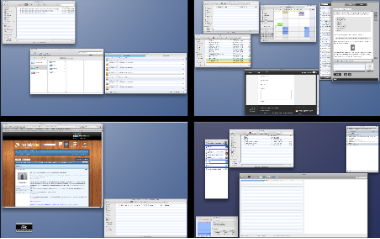