Just a short blog post regarding the recent OSX Leopard update 10.5.1. Attempts to install it the previous evening were met with abject failure on my part, and replacing stock vanilla kernel and kexts helped naught. I had to begin from Zero again, wiping my system clean and this time following documentation and common sense + logic to the T.

As it turns out, I have successfuly managed to implement a dual booting Vista+Leopard system running 10.5.1 *directly updated from Software Updates*. Am running a stock vanilla kernel with no additional kexts. I have fully documented the steps I followed, lest the problem should arise again. But due to the rock stable nature of the kernel I don’t foresee any problems cropping up.

lol and to those who "gang"ed up on me, lol y’all know who you are, BOO to you! I have fully working system, and it just runs dreamy! Oh ye, look at the pic and despair! 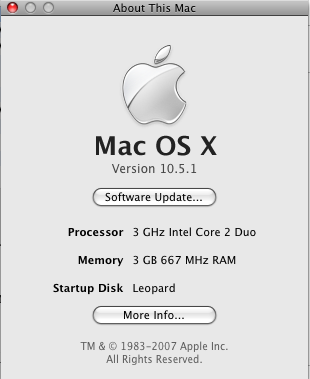 One thought on “Leopard updates, EFI shines thru!”