What an absolute bugger! Qumano crashes my OSX faster than I can say “skimmed milk”. It is just an absolute nuisance. I don’t quite know what the reason is, but I am going to miss WYSIWYG editors for OSX. Unless of course I take the time out and code one for myself. It really is a nuisance, Journier was no good, Qumano crashes, I know not wither to look from here, and what shall be my endeavors. Well I guess for the time being it is blogging from the website for now, when I am on OSX and from Word 2007 when I am on a Windoze machine. Any help here would be greatly appreciated of course.

Well, OSX has been running pretty well otherwise. I got the GCALDaemon running just fine, but couldn’t stand the skewed nature of updates and how often the Google calendar updated, so I have sworn off, and come to using Google Calendar exclusively, and have subscribed to the Web feed using iCal. Works pretty well, can’t make any changes in iCal though. Here’s a screenie 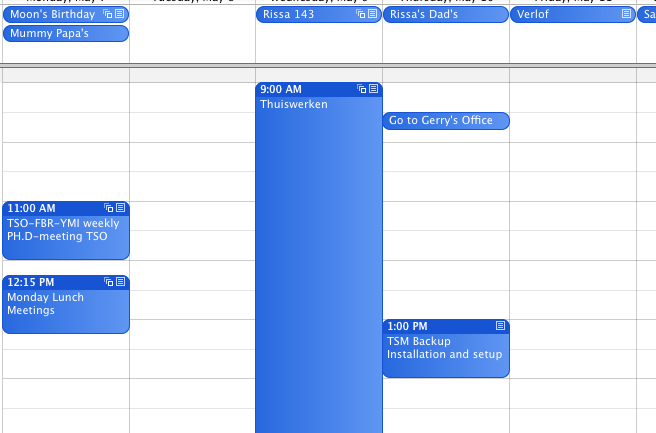 Ugh, Qumano has left such a horrible taste in my mouth. I just abhor what that disgusting software does to my OSX. Well, no longer. I shall find a solution or code one!

Readers of my previous blog will remember just how iPhoto on my previous endeavor used to crash, the minute I tried to import more than 1000 photos in its database. You will of course be really ecstatic to know that on this installation I have moved all of my 11,396 photos to iPhoto, with nary a loss of performance! It imported all the pictures really fast and indexed them according to year. I then created some “smart” albums of the time when my beautiful Rissa was in town, and la voila! It works really well! On the subsequent startup it told me that I should regenerate the Thumbnails to ensure that iPhoto works quicker. I hadn’t even noticed the performance loss the first time, but ah I did the neediful, and iPhoto, is working GREAT!

Last night was the night of the Eurovision finals. Serbia won the vote, beating Ukraine by a narrow margin. It was a Baltic centered vote, with most of the Baltic countries choosing to vote for their neighbors rather than songs that actually had some merit. Have I mentioned that the commentary done by Sir Michael Terrence was just the MOST fun ever? The BBC is the place to be while watching the Contest. Sir Terry’s witty retorts and interjections had me rolling in the aisles with laughter, both last year and again this year! The contest was broadcast from Helsinki, Finland, and was organized well. So much better than the last time around. The bloc voting is getting really old, and Eurovision is turning out to be a showcase for Nations flexing their muscles, rather than a fun and joyous musical fest. The songs were, as always horrid, and just made one cringe at the stuff that some countries choose to send to the contest. Oh well. I guess I am peeved that Britain along with Ireland and France was second from the last.

Rissa spent yesterday spending a beautiful day with her mom, on the occasion of Mother’s day. It was hilarious as I watched her do the dishes for 2,5 hours straight! I didn’t even imagine one could have that many dishes! I am tired within the hour, and really swear under my breath, that the next time, I’d eat out of the pan. But it never really “pans” out. Anyway, she has her exam on the morrow, so I will be ultra-quiet this day. Like them mousies. Ja ja.