O Starcraft II, the brainchild of Blizzard Entertainment, why doest thou suffer so under Mac OSX? I tried cajoling, I tried upgrades, and I tried updates, all to no avail.

Mac fanatics and die-hards at Mac oriented forums will castigate me for this, but it is true, Mac OSX is simply not conducive to gaming, even for games written FOR the platform. Case in point Starcraft II. The latest and the best in strategy games from Blizzard. Eagerly awaited, I was amongst the first to rejoice when I found out that it would play natively on OSX – sans Steam, and sans emulators. What I didn’t account for, was the performance. And man does it suffer under OSX.

Here are the specs of my rig:

Not the best of systems, but certainly no slouch. The graphics card is a bit old – about a year, and it is well over the minimum specifications for Mac OSX from Blizzard.

So I purchased a license and fired up the game on my Mac, and to my chagrin, all the default recommendations were at “Medium” or “Low”. I tried overriding the same, and set them to “High” to painfully watch the frame-rate drop to 2-5 FPS. UGLY. I tolerated the game at “Medium” and a couple of “Low”, though the game is still gorgeous at these settings.

I was curious though, how the game would play on a Windows install, so I decided to compare the performance by installing Windows 7 on another HDD on my system (specs above). I went through the motions, updated the game, and booted it up. I stood bewildered: the recommendations for all graphics options were “Ultra”, and the game rarely drops a frame, with everything set to “Ultra”. Boasting of smooth transitions, breathtaking videos, perfect gameplay, Windows version of SC2, just simply blows the Mac version out of reckoning. Why ever would anyone choose to play any game on OSX? 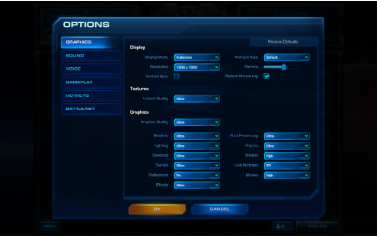 4 thoughts on “Starcraft II on Mac, vs Windows – performance”